Family Photobooks Are So Worthwhile

Colette first contacted me in October 2012 and since then I have scanned many of her family photographs. I asked Colette to tell her story…..

“I think it all started with me seeing your advert in a local magazine and being sad at seeing my son Fabrice’s photos, taken in the 1970s, deteriorating rapidly. I had made an album for him for his 30th birthday in Dec 2002. I more or less stuck the original photos in chronological order in the album and wrote a line of text underneath each photo with the date and the place it was taken. Fabrice was absolutely thrilled with that first album. For him, it was like going back to his roots, if you see what I mean. I had the impression of having given him his childhood back and he was very moved that I had spent quite a bit of time making that album.
After I saw your advert, I thought you were the person who could save Fabrice’s photos. I gave you a small job and I was very pleased with the work you did, so I unstuck all the photos which were in Fabrice’s handmade album and gave them to you to scan and optimize in a view to make a new album. You showed me the albums you’d made for your children and I thought they were brilliant.That’s when I thought I had to do the same for my other children, Marianne and Hugo, not just Fabrice. While the work was in progress for the first albums which I gave to my children for Christmas 2014, you gave me plenty of advice and you showed limitless patience as I changed my mind time and time again.

My three children got their second album for Christmas 2015 and to see their reaction when they first look at it is priceless and worth all the efforts. They look at each other’s album and exchange memories and ask each other questions. As a parent, it is really wonderful to see. Albums number 3 are in the pipeline for Christmas 2016, for the three of them as their pictorial history continues.”

Here’s a double page spread of one ofr the the finished photobooks – 29cm x 29cm, 100 pages – a great opportunity to enlarge the best photographs too 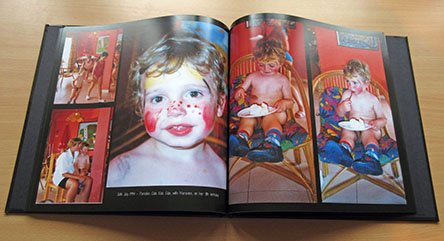