Happiness Is a Photograph of Mum 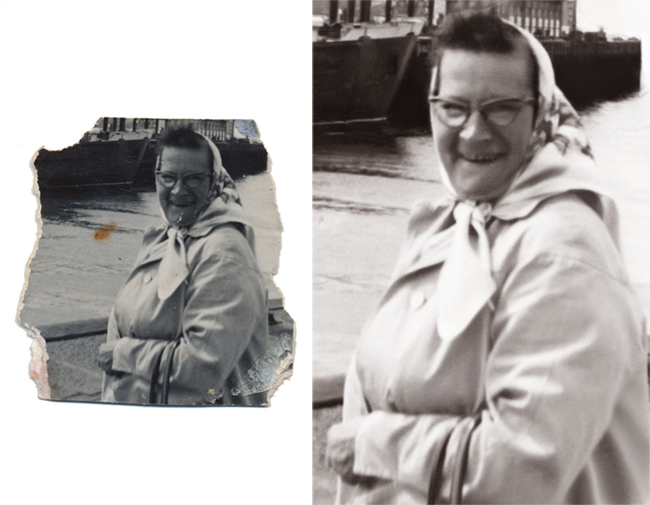 “Our daughter said that as soon as my husband saw the photo of his mother that you managed to create from the old somewhat dilapidated little old photo, he would probably cry. I wondered if I ought to give it to him on some other day rather than his 86th birthday if it would upset him. However I did eventually give it to him yesterday on his birthday.

With my help he unwrapped it as he only has the use of one hand. He said nothing at all just kept staring at it. At last I realized he had tears in his eyes as he hadn’t realized there was any kind of photo of his mother who died many years ago.  He put it on the table next to his chair and just kept picking it up and putting it down still unable to say anything. However as soon as other people begun to arrive to celebrate his birthday he insisted they come and look at the photo he is so proud of.

As he is disabled in a wheelchair he has carers twice a day to help. The first thing he did was to hand them the framed photo explaining in his own way that it is his mother. Our daughter was also quite emotional when she saw it remembering her old cockney grandma. I told her she was right her father had cried but only with emotion and happiness.
He is amazed that you were able to restore such a small,  damaged picture into a perfect photo of his mother who he was so close to as she brought him up alone. He now has the picture on a table where he can see it at all times. We have numerous framed photos of family but until now he had nothing. I just wanted to thank you so much for the trouble you took in restoring the photo and giving him such pleasure.

Thank you again. I have told everyone who has seen it who restored the photo so don’t be surprised if you hear from a few next year!!”