Last year I was asked by Nigel Bayes to recreate the logo for his vintage fire engine as the original had been painted over and was unusable.  Creating all the different elements that went to make up the logo the final image was sent to Nigel  in July 2014. I have now received the much anticipated final photographs of the new logo. Below is the original image used as the template and then the finished new logo and in situ on the fire engine.

The artwork for my vintage fire engine which you took so much trouble over for me has now been made into the badges for the doors.  Here are some photographs showing the finished product in pride of place which I think you will agree is pretty good thanks to all your effort. 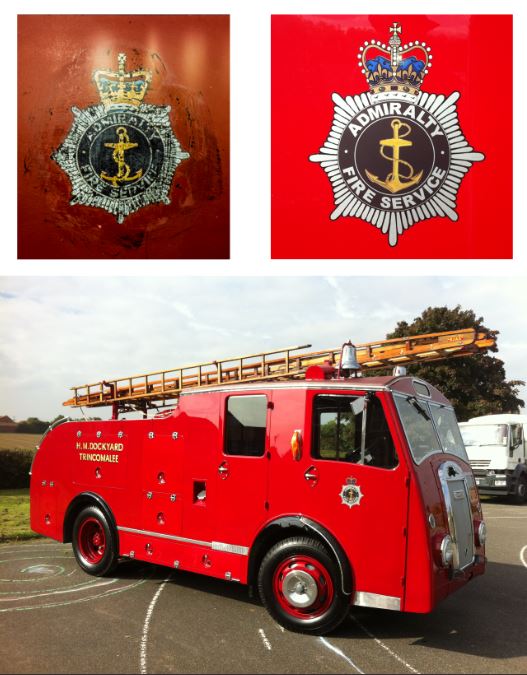 Here is a potted history of the fire engine

1955 Dennis F8 Engine Rolls Royce B60 six cylinder petrol 4.27 litre. The vehicle was ordered from “Dennis Brothers” around March 1955 by the “Ministry of works” and delivered in November. One of three on the order one for H.M Dockyard Malta and two destined for H.M. Dockyard Trincomalee of which mine is one.  The two vehicles  both worked in the Dockyard probably only for a couple of years as my information is that it was decommissioned after 1957. At that point both vehicles came back by ship to Rosyth Dockyard and the sister vehicle remained there as a first line appliance. Mine was sent to Devonport Dockyard and served as a first line appliance there until 1968. It then found its way overseas yet again to Gibraltar to work as an upper rock machine. It was there until 1976 when it was sold off as ministry surplus by some miracle it returned to GB and a scrapyard within twenty miles or so from where I live. That is where I saw and fell in love with it, I bought it in 1978 with no idea what would be involved. It was in a pretty sad state at that point I didn’t know at the time but the engine had broken pistons/rings and was generally sick. I spent three years restoring the vehicle learning as I went but not having the in depth knowledge that I have acquired over the years. My long suffering wife and the two kids as they came along have rallied the vehicle around the country for many years having the odd year off to do other stuff. The engine gave up the ghost enroute to an event and had to be transported home (I have to say this was the first time in all those years that she failed get us home). This was the catalyst for a second and much more in depth restoration. Restoration two. Remove engine complete strip down. Block bored out new full length liners fitted, new pistons, new bearings, crank ground and polished, new camshaft bearings, line bored, new timing gear, Cylinder Head skimmed, all valves re-cut, new clutch all ancillaries serviced, radiator rebuilt with new core, Flew to Ireland to obtain a serviceable camshaft (that is a whole other complicated story). Whilst the engine was out it provided space to get into the hole it left so a complete chassis clean and repaint. A total rewire all instruments restored, brakes refurbished, fuel tank replaced, cab interior painted and varnished. Finally and by no means least a pretty much bare metal re-spray with two pack and a lacquer finish. State of play just now is that the painting is done apart from three locker doors which have been re-skinned. The first stage compounding has been done and now we wait maybe into the new year for the paint to harden and then final compound and polish. Oh yes and there are twenty four locker door hinges to have their pins removed to separate the two halves for chrome plating. The list above shows the major jobs there is a myriad of smaller tasks which take endless time. It would be fair to say that I have intimate knowledge of every nut bolt washer and rivet on this vehicle and I have ended up as consultant to other owners across the world on various details!